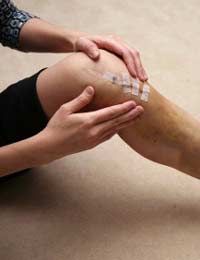 Sarah was late for work one morning. She was hurrying along the pavement, not really looking where she was going because she was trying to send a text on her phone. Carl, a workman, was doing some repairs to a shop frontage and was in the process of securing cables to the pavement in accordance with health and safety regulations.

Sarah tripped over the cables and fell to the ground. She badly bruised her knee, ripped her trousers and grazed her hand as she fell. She was shaken by the accident but immediately started shouting at Carl that he should have been more careful.

Sarah took Carl’s details and wrote the name of his company down. When he got back to his employers. Carl filed an accident report. Sarah went to work but her knee was very painful. She took the afternoon off work to go to the doctor, who told her that she was likely to be badly bruised but that she hasn’t broken anything.

The next day, Sarah’s knee was very stiff and she could hardly move it. She took photographs of her injuries: the grazes on her hand and the bruise and swelling on her knee. She took a taxi to work rather than catching the bus as usual.

Two weeks later, Sarah wrote to Carl’s employers and explained that she wanted compensation for her injuries. The employers wrote back, defending Carl’s actions, and stating that they refuted her claim that Carl had acted in any way negligently. They also claimed that Sarah had not been looking where she had been going, and that if she had been more careful she would not have walked through the bollards that had been erected that were supposed to keep the public away from the cables.

Sarah could not recall seeing any bollards at all, and was sure that there had been none on the pavement when she had her accident. She wrote a ‘last chance’ letter to Carl’s employers, which said that if they didn’t settle her claim for compensation she would not have any choice but to take them to court.

The company didn’t reply. As a result, Sarah spoke to a friend of hers who was a lawyer, who told her that if she was successful she would be unlikely to recover more than £1000. As a result, she would be able to pursue her personal injury claim in the small claims court. Sarah decides to do this, and to represent herself.

When the case came to final hearing, Carl’s employers were represented by a barrister. Sarah felt that this gave them an unfair advantage, but during the hearing she got the impression that the judge was being nicer to her than to the lawyer for the other side. Sarah argued that Carl didn’t take reasonable care in the way he put the cables on the pavement.

The barrister argued that Sarah was so caught up in her mobile phone that she wasn’t looking where she was going, and managed to miss the bollards and missed the cables. The barrister also alleged that Sarah was so reckless that there was no way Carl, and vicariously his employer, could be liable for the accident in any way. Sarah suggested that this was not the case at all, that her actions could never have been construed as negligent.

The judge listened to all the evidence and decided that he was not convinced that the bollards were sufficiently prominent for Sarah to have seen them. However, he also found that Sarah had contributed to the accident by not paying proper attention. He decided to award Sarah £400, which was half the amount he would have awarded her if she had not contributed to the accident. Each party was made to pay their own costs.

Debt Recovery: A Case Study
Share Your Story, Join the Discussion or Seek Advice..
It has taken 16 weeks to have my granite worktop fully installed. The first attempt the island was fitted but the fitters broke the worktop. After 2 more breaks, the wrong colour was brought, the fitters turning up with only 2 out of 5 pieces, the van leaving the depot without my worktop, the worktop failing quality inspection and twice the agreed installation date was cancelled. My worktop was finally fitted however the upstands are not level and the fitters will have to return. Each time the fitters say they are coming I have had to get my builder and his mate to remove the old worktop, hob, and sink and then reinstall them when the fitter has failed to complete the job. My builder has invoiced me for 8 failed attempts. I am beyond stressed and want to claim compensation for me as well as settlement of the builders invoice. My question is how much is reasonable for me to claim.
Wendle - 16-Jan-19 @ 3:38 PM
Title:
(never shown)
Firstname:
(never shown)
Surname:
(never shown)
Email:
(never shown)
Nickname:
(shown)
Comment:
Validate: