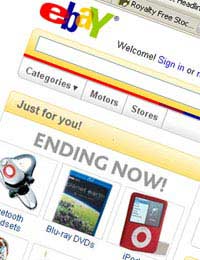 Edward found a table advertised for sale on eBay and decided he wanted two of them for his living room. He emailed the seller who said that he would be able to sell him two matching wooden tables.

Edward enquired about the cost of delivery and the seller, who was also in the UK, stated that he would be able to arrange to have them delivered by courier. The price for packaging and delivery was reasonable so Edward paid the seller by Paypal. The transaction was completed via a number of emails, rather than through eBay, which was something that Edward was later to regret.

When the tables arrived, Edward was surprised to see that they were merely placed inside cardboard boxes and had no other padding or protection. When he lifted the first one out of the box he could see that one of the legs was splintered and had in fact broken. The second table had a large dent in the top of it, as though something very heavy had been dropped onto it. It was also very scratched.

Edward emailed the seller immediately to tell him that the furniture was not acceptable, the reasons why the furniture wasn’t acceptable, and that he wanted a replacement or a refund. The seller replied, stating that he had adequately packaged the tables and that the couriers must have been to blame. He asked Edward to ‘bear with him’ while he made enquiries with the courier.

However, the courier stated that they had not been told that the boxes contained anything fragile and also that the courier was not responsible for packaging the furniture prior to putting it in the boxes. Edward decided that he wanted his money back and so contacted the seller to ask how he should arrange for the return of the damaged goods. Shortly after this the seller stopped interacting with Edward, and refused to acknowledge his letters or answer his telephone calls.

Edward subsequently had no option but to lodge proceedings in the small claims court to recover the cost of the furniture from the seller. The seller in turn joined the courier to the proceedings as a second defendant, stating that it was their negligence that caused the tables to arrive damaged. It was the seller’s contention that he had contracted with the couriers, who should have used reasonable care in exercising their role of delivering the furniture.

Debt Recovery: A Case Study
Share Your Story, Join the Discussion or Seek Advice..
We paid 80% upfront for a kitchen to be fitted through a company that could complete the whole job fitting flooring plumbing electrics tiling etc.We were told the job would take max 3 weeks normally quicker but due to covid they couldn't have lots if tradesman in at the same time.We were told regardless the job would be done for Xmas the job started 3rd Dec its now the 24th Jan and its still not complete. We didn't have a kitchen for Christmas and 2 days before had to change our plans as our home was not in a state that was comfortable to host Christmas day for family and children.Totally ruined our Christmas plans.We are still missing a fridge freezer.The whole job has had to be started again due to poor workmanship this started again on the 4th Jan and taken out.Appliances damaged because fitters unpacked things and fitted around them.The mess left was awful kept being told it would be done at the end of the job.When it was cleaned we discovered units damaged and were told you won't see that when the integrated appliances are in. The whole kitchen had to be replastered due to poor workmanship then when we painted it half the plaster fell off one off the walls. The job was supposed to have an allocated project manager to reduce the stress this hasn't happened. We involved the managers about the poor job and our unhappiness with the service on 12th Dec they said they would take over we had a few communications from them but this hasn't made the job go ahead any quicker.Excuses are made about appliances not being in was due to brexit when I was informed in November that all my appliances were there and they were ready to start the job.We had other customers appliances and fixtures fitted to our home its likely our appliances were delivered to others houses.the stress of working from home with banging and drilling for the 8 weeks this far is awful.I've had to work in the evenings to catch up on the work I haven't done in the day.Bought new plug sockets they were fitted and we've been told we need spacers to fit them against the wall because of how the plastering has been done.Totally ruins the aesthetics.The amount of cupboard frontages and end panels reordered have been awful keep recibing them in gloss when we ordered matt this has caused further delays.
Miki - 24-Jan-21 @ 9:49 AM
Contemplating taking car dealer to small claims court - sold is Ford Focus for £550.00, two days later clutch broke 400 miles away. He says has done enough by offering to repair if vehicle returned to him, AA [and Consumer Protection Act 2015] say the if vehicle cannot be driven, it is the responsibility of the dealer to recover the vehicle at no cost to customer. He says that, essentially, the age and price of the vehicle dilute or negate his legal obligations, and that this will be the judgement of a Small Claims Court? Is he bluffing? Is there anywhere I can find precedent for judgements of this type?
Roxx - 5-Sep-17 @ 2:38 PM
Title:
(never shown)
Firstname:
(never shown)
Surname:
(never shown)
Email:
(never shown)
Nickname:
(shown)
Comment:
Validate: