Home > Small Claims > How to Make a Claim in Court

How to Make a Claim in Court 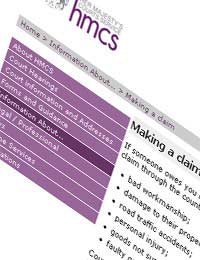 Being owed money by someone can become an all-consuming frustration. You know you are in the right, you have tried to be reasonable and yet being reasonable has got you nowhere. If all else has failed it may be that the only thing left is to take them to court.

Going to court should always be treated as a last resort. Before starting a claim against someone the following questions should be considered:

Do I Have to Do Anything Before Starting a Claim?

Anyone considering going to court should already have done everything they reasonably could to reach an agreement with the other side before starting a claim. In addition, for some types of cases, special “pre-action protocols” apply. For example, claims for personal injury, professional negligence and disrepair of housing all have pre-action protocols. Whilst failure to follow a protocol may not be fatal to a claim, it may have an impact on the amount of damages or costs that a court is prepared to allow – even if the claimant wins the case.

All claims are started in the same way. A claim form is filled in by the person starting the case or by their solicitor if they have one. The claim form sets out:Some types of cases have slightly different claim forms.

Claim forms can be obtained from any county court or can be downloaded from Her Majesty’s Court Service (HMCS) website. This website also has a list of all county courts in England and Wales together with their addresses. Most courts’ offices are open from 10.00 am to 4.00 pm, although they may close for lunch between 1.00 and 2.00. Whilst court staff are not able to give legal advice about the basis or merits of a particular claim they will be able to advise on the procedure that should be followed and the forms that should be filled in.

The claim forms come with guidance notes on filling them in. It is vital that these are read before filling in the form. It is very easy to make mistakes on a claim form which can then lead to a substantial delay in the claim being resolved.

Once the claim form has been filled in the person bringing the claim, the claimant, must make copies of the form so that there is one for the court and one for each defendant that they are claiming against – as well as a copy for themselves. All of the copies, other than the claimant’s, must then be handed in at the court.

Once the claim form has been filled in it is lodged at court and the claimant will have to pay a fee to issue the claim. The cost of issuing a claim depends on its financial value. For cases falling within the small claims financial limits the following fees apply (as at May 2008) when issuing a claim at a county court office counter. If the amount claimed is:People on some benefits or whose income falls below a certain level may be exempt from paying the fee to issue a claim. The court staff should be able to help if this is the case or, alternatively, more information can be obtained from the HMCS website.