Introduction to the Small Claims Court 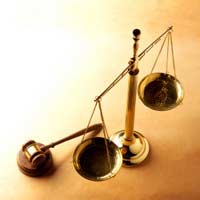 The courts can be frightening places. Populated by people wearing wigs and strange clothes, they are clearly no place for ordinary people. If a case goes to court the costs involved can easily outweigh any potential financial gain. The rules governing hearings are difficult to understand and may often be written in Latin. The only people who can issue a court claim are those who have so much money that they can afford to pay for expensive lawyers and will not be bankrupted if they lose...

People may assume that all of the above is true. However, whilst it may be true that going to court is a serious step that should not be taken lightly, real efforts have been made to ensure that ordinary people have access to justice.

In 1973 a new simplified procedure known as “small claims arbitration” was introduced to the county courts. Originally limited to claims of up to £100 in value, the new system was popular and over the years the value of claims covered by the system was increased.

In 1998 the Civil Procedure Rules (CPR) came into force. The CPR introduced new rules of procedure in the civil courts but also consolidated many pre-existing rules that had previously been contained in different sets of legislation. The CPR simplified the rules governing civil law hearings by incorporating most of them into one piece of legislation.

The very first rule of the CPR is known as “the overriding objective”. This rule states that the principal purpose of the CPR is to ensure that cases are dealt with justly. The rule goes on to say that dealing with cases justly includes, amongst other things:

The CPR states that every other rule it contains should be exercised in a way which gives effect to this overriding objective.

The CPR and Small Claims

What Sort of Disputes Can be Dealt with at a Small Claims Trial?

Small claims usually involve cases where somebody is owed money by another person. Providing the amount of the claim comes within the financial limits imposed by the CPR and the case does not involve any particularly complex areas of law these may include claims arising out of:

Where Can I Find a Small Claims Court?